what others have to say about willoughby productions . . .

​Inside the  Wild, Wacky Wonderful World of the WNBA -- By Fran Harris, iUniverse

Lifetime to Make A Story Out of the WNBA -- By Susan Slusser, San Francisco Chronicle

ESPN Tries to Get in the Morning Game (Again) -- By Brian Steinberg, Variety

ESPN2 Gets in the Morning Game -- By David Bauder, The Associated Press 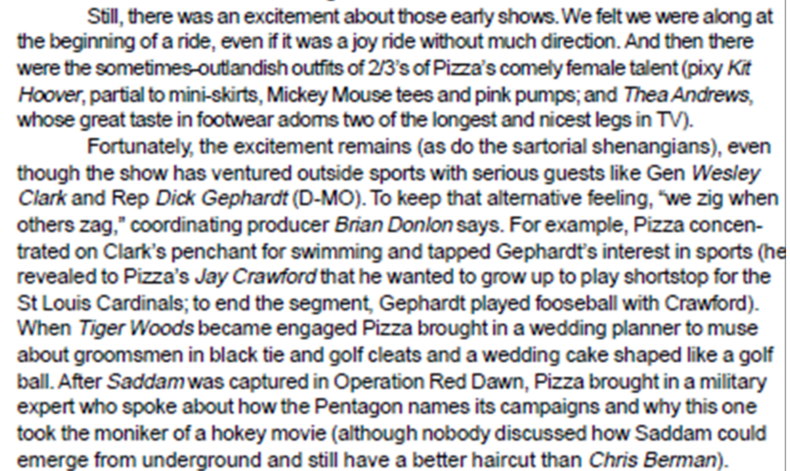 Boston-- Jon Stewart has had his share of presidential candidates on "The Daily Show" but John Kerry has resisted the late-night lure.

"Is this a strategy by John Kerry to present himself as serious -- or is he inherently unable to smile?" Stewart asks in mock-stentorian anchor tones.

The Comedy Central satirist, who chatted up Tom Brokaw here Monday, delights in making fun of the very media hordes — or "whores," as he deliberately mispronounced it — he has now joined at the Democratic convention. His job, he concedes, is to be "the dancing monkey." But he insists the real media — as opposed to the fake news show that has made him wealthy by skewering the real media — are so obsessed with entertainment that they've fouled the journalistic atmosphere.

How surreal is this? The professional funnyman is fuming about the sorry state of the news business, while a group of so-called serious reporters are trying to be funny, or at least coax Stewart into being his usual comedic self, while they absorb his tongue-lashing over breakfast.


With the Big Three networks each granting the Boston marathon a mere three hours over four nights, less-traditional media outlets have rushed to fill the vacuum. Anyone with a microphone and telegenic hair, it seems, is here, including MTV, ESPN, BET and World Wrestling Entertainment. This is the big show, and even those normally consumed by smackdowns and hip-hop want a piece.

"Cold Pizza," ESPN's morning chat show, usually cares about FleetCenter only when the Boston Celtics and Bruins play there, but Executive Producer Brian Donlon finds the "marriage between politics and sports" irresistible. Candidates Edwards, Dick Gephardt and Wesley Clark appeared on his show during the Democratic primaries.

Monday's show covered Kerry throwing out the first pitch at Fenway Park ("in the dirt," an anchor griped) and interviewed historian Doris Kearns Goodwin, who admitted that most folks here would, if pressed, choose a Red Sox victory in the World Series over a Kerry win in November.

Such fare may be good fodder for ESPN and MTV, but Stewart sees the cable news networks leading the dumbing-down parade. He says shows like "Crossfire" and "Hardball" and CNN debates between Donna Brazile and Bay Buchanan typify the medium's mindless partisan debates — kind of like having Coke and Pepsi spokesmen debating beverage supremacy.

"Ann Coulter is rewarded because she just keeps saying the craziest (stuff)," he says. 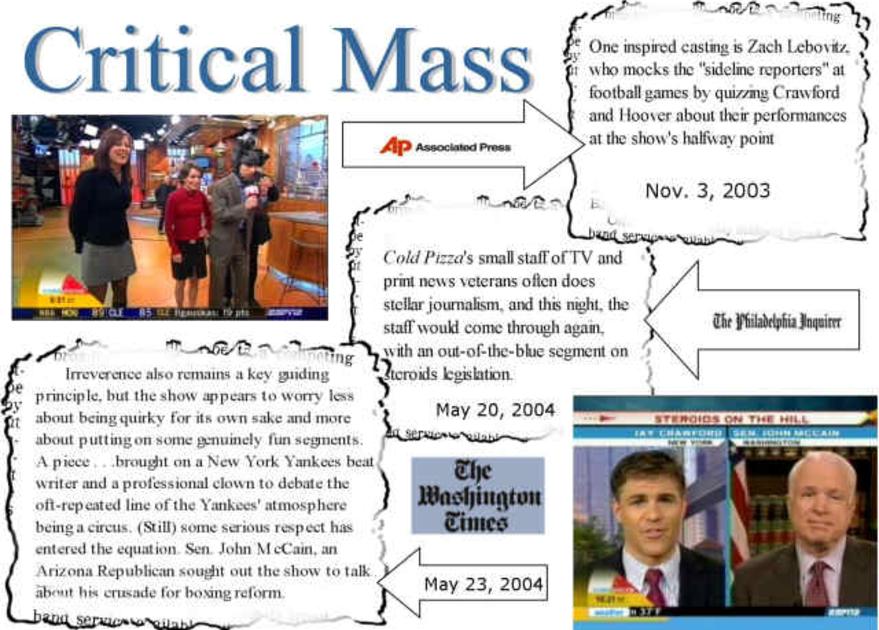